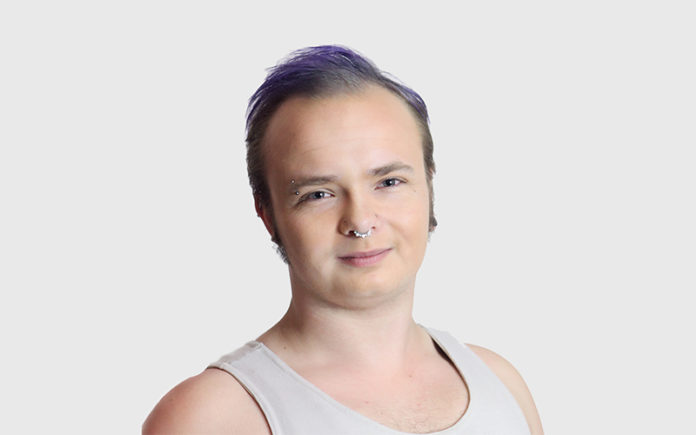 This isn’t a quote from a 13th-century poet, the first American President or someone standing at Stonewall in the protests of yesteryear.

This is from the current Mr. Gay Wellington Adrian Renor, who this weekend makes the trip to Auckland to join nine other finalists to decide who will be Mr. Gay New Zealand 2017.

And the moment is not lost one bit on Adrian. One of the first trans guys to win a Mr. Gay competition in New Zealand and on Sunday could be heading to Spain as New Zealand’s representative for Mr. Gay World.

He is just so excited that a tiny, chronically ill trans guy had even been given the chance to participate as he explained in a revealing interview with eikon.

“I’m so aware of how lucky I am to be in this position, and how fortunate I am to have so many people backing me,” Adrian explained to eikon.

“I actually couldn’t afford to come up to Auckland, but my queer family came together and put on a last minute fundraiser to help me pay for food and transport.

“I don’t know what I’ve done to deserve such a great community, but I will keep doing my best to do them proud.”

Adrian is a circus performer and a student as well as working with InsideOut and the Wellington queer scene.

He sees his nomination as a finalist as a chance to spread hope to other trans and chronically ill people across the globe.

“We don’t have to be overlooked. Just by being in this contest, I think I’m helping.

“Even if it’s one person. Winning and going on to Mr. Gay World would be a step forward, not just for the minorities in our community, but for the overall acceptance and accommodation of minority peoples.”

“Making events like this as inclusive as possible is overlooked, and it shouldn’t be.

“This is a celebration of queerness, not accommodating all of us is a step backwards. As the underdogs, we should know and should do better.”

The key issues for Adrian, as explained in his opinion piece are over-sexualization and inclusiveness.

He said it’s hard to find a queer space that isn’t centered around sex or booze.

“If you’re a young queer person, the only queer spaces open to you are the occasional group therapy session or internet forums.

“Almost every instance of queer people in media centers around sex, and there is so much more to us.”

In the lead-up, to the competition, Adrian spoke with current Mr. Gay New Zealand Bernard Lee and was calmed by the fact that Bernie also felt overwhelmed being in the same position that confronts Adrian.

Adrian is looking forward to meeting the other finalists in person on Sunday at the Ending HIV Big Gay Out as they all seem wonderful.

“I can’t say this without being clichéd, but I am so honored to be alongside these incredible activists and community heroes.

“Any of them could take the title. I’m hoping, however, for Alexander to win.

“Alex is also from Wellington, and I think he’s such a humble yet driven person.

“If he wins, I want to be there by his side and help him with the rest of his campaign.

“Win or lose, I truly believe that Alex will make a difference to this community.”