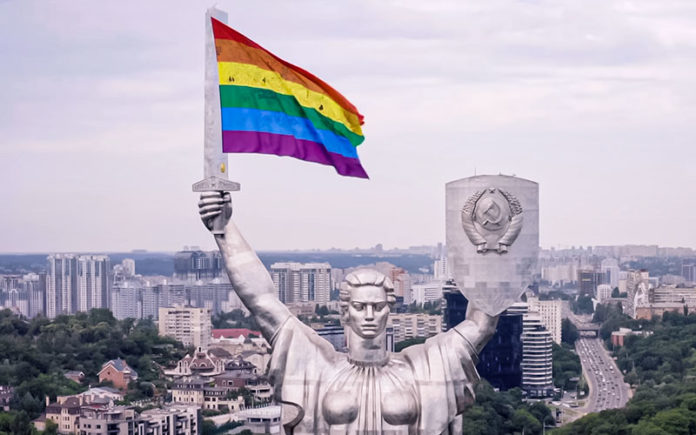 In Ukraine, a rainbow flag has been hung on the Statue of the Motherland… with a drone.

As compensation for the cancellation of the Pride March in Ukraine, activists have hung a huge rainbow flag on a famous statue in Kyiv.

The flag was hung on the sword of the Statue of the Motherland, in Kyiv, capital of Ukraine.

This building, 9 metres taller than the Statue of Liberty in New York, is a symbol of the Soviet era, inaugurated in 1981 by Leonid Brezhnev.

The video, shared by Kyiv Pride, has shown the flag held up by a drone high above the city accompanied by the hashtag #momwillunderstandandsupport (“Mom will understand and support”).

The symbol is strong: in Kyiv, the far-right has a storefront and often tries to oppose LGBT + demonstrations.

In 2018, 56 far-right activists were arrested by police for forcibly trying to block the Pride’s departure from Kyiv.

Last year, the march gathered more than 8,000 people and went smoothly despite the persistent presence of the far right.

This year, the Kyiv Pride March, like everywhere in Europe, had to be cancelled due to the Covid-19 pandemic. In parallel with an online event, Kyiv Pride has decided to make a splash by displaying this 6 x 4-metre rainbow flag.

Following this show of pride, as Queerty notes, Kyiv Pride had to face a wave of homophobic hatred and comments from internet users accusing the association of “vandalism”, “degradation” or even “being in sin and shame”, with some noting that the flag was hung on Father’s Day.

However, the company that loaned the drone to the association insisted that “the drone flights were carried out under the legislation in force and according to the rules of the State Service”.

The company added, in a Facebook post: “We are against any manifestation of aggression towards the LGBT + community, which we consider to be of the Middle Ages. In Ukraine, although homosexuality is not penalized, LGBT + people continue to be exposed to serious prejudice and discrimination, in a country that still does not legally recognize same-sex couples.