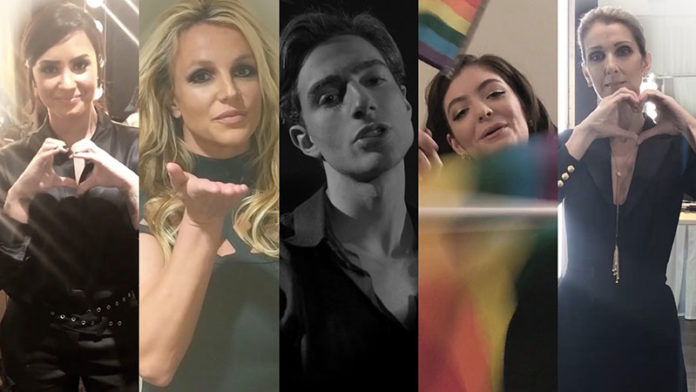 Brazilian pop singer and activist Yann has united some of the biggest artists in the world to raise awareness for the epidemic of anti-LBGTI+ violence in Brazil.

Freedom to love is the theme of the song “Igual” that was composed by the singer himself and its accompanying music video features over 25 artists, including Britney Spears, Céline Dion, Demi Lovato, Lorde, The Chainsmokers, Boy George, Diplo, Chelsea Handler, Melanie C, and Jason Mraz showing support to the cause.

The shooting of the video united representatives from Brazil’s LGBTI+ community, and was scripted and directed by the pop singer himself.

It was also his idea to include support clips from artists and allies.

Kiwi Lorde, for example, proudly waves rainbow flags supporting the cause, Britney, Demi and Céline celebrate love by doing the heart hand sign; Lana Wachowski filmed with an actual rainbow, and John Waters shot his support video in a cemetery, in a poignant tribute to the towering number of murders due to hate crimes in Brazil.

“Unfortunately, most of the world isn’t aware that Brazil is an incredibly dangerous place for the LGBTI+ community,” said Yann

“It was important for me to help shine a stronger light on what’s happening here because Brazil’s actually the country with the highest LGBTI+ murder rate in the world.

“Yet, all of this is disguised under our dichotomous liberal lifestyle.”

According to the musician, the intention of the video is to also show diversity within the community.

“Our plurality is awe-inspiring, so it would never be possible to truly represent every facet of our diversity, but I hope that this song and the support of everyone involved will bring more visibility for us to continue to fight towards changing the real situation of what’s being done to our LGBTI+ community.

“The goal with all this international support is to raise global awareness to what’s happening here. These are also issues being faced by our community in most of the world.”

All the proceeds from the single’s sales and streaming will go towards assisting Brazil’s LGBTI+ community, by being donated to the NGO Grupo Arco-Íris.